What did you do to your mustang today

Replaced headlights. Quick and easy swap and new headlights are reasonably priced. Decided to change from the black backing to chrome. Old headlights looked good from a distance, but had some hazing around the edges. Much easier headlight install than the MR2 - bumper and a pile of clips have to be removed to change an MR2 headlight. 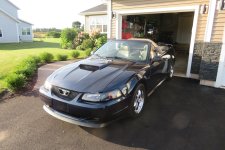 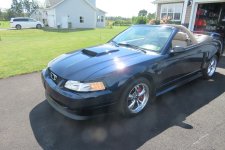 Looks good.
Back to basics more traditional.
I like it.

Looking good,and really helps to see and be seen. I know old eyes appreciate good lights in my case

Well , I could have the record for the first guy on MM to park his car for the winter this year.

The car has picked up a bit of a whine in the last couple of weeks, but since I'm divorced, I crossed that off the list as a possible cause.

The pitch and volume of the whine is dependent on what rpm the engine is running, so it's most logically something driven off the front of the block.

Could be idler arm or tensioner bearings, alternator bearing, or the A/C compressor.

Standing in front of the car, it sounds like the noise is coming from the left hand (passenger) side, which says A/C compressor to me.

In the spring, it took me two weeks to book in at the dealership for a simple oil change, and another two weeks after that to book in for the new rear tire installation.

That puts me into mid to late September, and I probably won't get out of there for less than $1000.

I'm also less thrilled about driving back and forth wondering if something is going to grenade.

So screw it, the sound isn't too bad, I'll deal with it in the spring when its back on the road and goes in for the 12 month oil change.

Any suggestions on possible causes are welcome.

Staff member
that sucks, but sounds like you have it narrowed down
not being in passenger seat helps
I would likely at least get it diagnosed that way you know what it is, what
its going to cost and everything in order for parts. and likely only hour bill to check it out.
just my 2 cents

Thoughts
A/C compressor should only make noise if A/C is on or in defrost ( clutch engaged) , if it’s the a/c clutch bearing the noise should change / go away when A/C clutch engaged

Noise is constant, A/C was not on, but that's something I'll try, thanks !