Staff member
I have been an F-1 fan for 45 years
many years ago, hard core, to the point of
before internet buy magazines to keep track of events
from the UK, following pre-season and the builds, to never missing
a qualifying or races regardless of the hours.

The sport become so much about cars and not drivers I lost
interest, still followed on sports page, but didn't read or watch much,
maybe Canadian GP etc.

this season with the racing being so close, I watched a few races and
tried to watch all of the last 5-6 races, became interesting with closest
championship race in over 20 years.

Hers the question or two, are you a fan? do you follow?
If so how did you like the ending? With newer young fans now
taking to the sport, TV endings seem to be more important than the rules.
Do you agree? Are you ok with Michael Massi's calls with 5 laps to go?

New champion versus world record setting 8th championship?
I have no favorite over Max or Lewis, but I dod beleive SPort
has rules and they should be fair, so not sure I agree with choices.

I think the race director didn’t follow the F1 rules properly and essentially gifted the race to Verstappen.

I read an article on Road and Track, should have saved it, where they elaborated on rules a bit more.

Basically the section Mercedes is protesting about only so many cars were allowed by pace car before racing resumed, whatever it is 48.12 or 38.12, I forget.

Well that is followed immediately by section 48.13 or 38.13 and apparently it supersedes the the previous section.

It reads something like the race director or his staff or delegate have the power or discretion (basically decision making ability) as to when they deploy the safety car and when they retrieve it.

I’m not pretending to know because I don’t.
I’m just citing something I read.
It reminds us that the complete rule book is more than one section and the events have to be judged on their totality.
Not just a snap shot.

For me, the thing I always felt cheated about with F1 and made me not care much was that it was never a race.
Instead it was a parade where richest teams had best cars and it was not about drivers.

Finally this year we got close racing and it made me pay more attention.
In doing so I noticed rulings go in the favour of Mercedes too.

Anyway, I watch for the racing, and I am glad they gave us a final lap shootout for the victory instead of ending behind pace car.

Maybe there’s an opportunity for F1 to learn a lesson and improve their format from this event.

Maybe something like the NASCAR overtime, so races don’t end behind safety car.

Staff member
your correct on the following ruling, heres the one that throws it all out the window.
if you allow cars to pass, you must do one complete lap before bring in the safety car
which would have ended under yellow, giving hamilton the win,

Massi circumvented 3 rules, which basscially handed Max the title.
Any 2 were almost not over the line, but 3 made it almost obvious.
IMO follow the rules and ! agree add 2 lapps after safety car if required.

If they had of stopped the race, both cars would have been on fresh tires
3 lap shoot out and even with the accident that alowwed MAx to catch up
the 12 seconds, it would have been fair.

Max on new softs, hamliton on 38 lap old hard tires, no contest.
MAx is a worthy champion who had an amazing season.
Lewis showed class beyond, in how he handled losing the race
thus championship.

Massi should not have that kind of control, he basically decided who won and lost
by breaking the FIA rules. That takes away the sport and turns it into entertainment.
What does F-1 want to be? I doubt anything will change even if Mercedes decides
to appeal, but hopefully F-1 Learns and makes changes so this can never happen again.

Similar story for me too. I did watch all of the last race and bits through out the season. Nice to see some wheel to wheel racing.
So what I learned to my surprise. next year they will discontinue the use of 13" wheels, going to 18" wow, that was a surprise.
With tires going bigger and bigger this seems one area that is lagging in F1.

I read that the original reason for the 13" wheels was to limit the brake rotor size. The rotor size is now speced in the rules so they can now go to a bigger wheel.

I just read on Road and Track that Lewis Hamilton has a brand new title as of yesterday.

He now has the prefix of “Sir” before his name after being knighted yesterday by the Royal family.
Prince Charles having performed the ceremony at Windsor castle.

He is the third F1 driver to be knighted after Sir Jack Brabham in 1978 and Sir Jackie Stewart in 2001.
However both those gentlemen’s driving careers were over.
Hamilton is the first active driver to be bestowed the title. 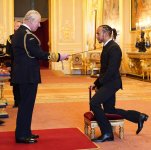 Very cool,
But wonder what he is saying to him ? You best stay 6 feet away from me or else ??

Staff member
Is that sword on his shoulder or throat?

On his right shoulder, other side.

You see the tip slightly behind his shoulders.

Bring back the IROC series.

Road and Track revealed yesterday that Mercedes has decided not to appeal the Abu Dhabi grand prix results any further.

The season is officially over.

This is the headline from the article:

“ Soon after the controversial finish to the title-deciding race, Mercedes announced its intention to appeal the result. Now, it's dropping the protest.”

The article says the FIA has formed a commission to analyze what happened at the race to improve the sport going forward.

In dropping the appeal, Mercedes said they will work actively with the commission to hold the FIA accountable to its word to make a better F1.

Article suggested Hamilton and Wolf were planning to miss the prize awarding gala last night.
Contrary to FIA sporting code.
This could get them in hot water with the governing body.

So maybe a NASCAR-ish overtime format is possible for the future…
We haven’t herd the last on this. 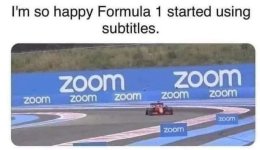