Good to see this annual event kick start the season,even without your cars,that's what will keep this group together,

I remember my Father took me to the first one,1975? I was so impressed,his friend had his car raised on blocks,and mirrors underneath,WOW!

If you ever have an opportunity to enter your ride,you will witness the other side.

When everyone arrives it reminded me of a Miss Canada Parent,every ride just keeps getting better as the trailer doors open,makes you want to leave and throw rocks at your car when you get home.

But after the pressure of getting things set up is over,you find yourself alone in a huge building with just the other car owners,then you realize they are all car guys with a passion.

You put a cover over them at night,some do some don't,the silence is deafening,and you are exhausted,

Next morning you arrive ,same thing in reverse,guys with coffee one eye open,ready to put in another long day.

You actually now associate the owner with the car,hear the inside stories,history,and even see phone pics of the stuff they have home,

During the day we are usually sitting somewhere in a group in the stands,if you leave for a bit someone always has an eye on your car,funny I never realized the owners aren't very far away,always on the look out.

in one picture of mine notice the +manage corvette across the isle.those two clowns were in their 70's traveller to shows for three months,won everywhere they went,

That car holds the track record as a gasser in New Hampshire,and he tried to sell it as that.

He bought it new and when it wouldn't sell he still had the original wheels and everything retrain related to make it original,sold the race motor etc to fund it.

people walked by and never read any of that,but the judges do,they made my weekend,welcomed me to their place anytime.

Side note they are friends with Paul Sr from Orange County choppers,lots of stories not forum friendly hahaha.

Notice the lack of people in the pics,eerely quiet early in the morning and late at night. 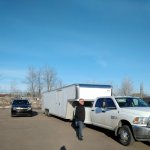 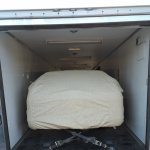 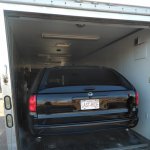 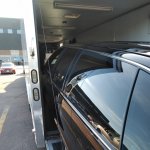 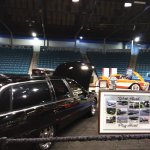 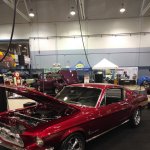 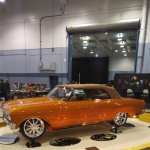 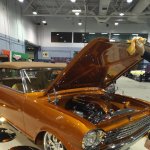 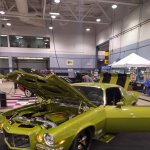 I remember seeing this van roaming Mountain Road Moncton in the 70's,

I think he was from Amherst,saw it at speed sport as well,

Then he chopped it,we were amazed when that took place,absolutely coolest thing we ever say east of California,way ahead of his times 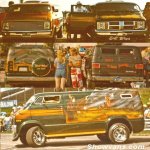 Staff member
It is a awesome show. Only ever been on the outside looking in. I am sure you learn some cool stuff!!

Staff member
That van is cool!!!

Staff member
Been there last 2 years, day trip but great fun,
cool cars and lunch with the Mustang crew
to kick off season is always good.
L

I would love to get to have a chat if possible this year.

Staff member
I met Dave the last time he was at this show. Just a quick conversation with him but he's pretty down to earth and easy to talk to. Agree with Lorne that he's one of the most talented out there. I've tried a few times to get the Saleen into this show but just too early and unless it's an enclosed trailer not sure I wanna chance the weather. But I'm off this year so a trip to Moncton could be had to take in the cars.

Staff member
Always a good show and a great place to get together and meet up after a long winter. Some will get together as a group before heading over as well. Who is all planning on attending this year?

I’ll likely make the trip for the day

Staff member
I will unless something goes sideways that day.

Staff member
I'm up for a day trip over on Saturday....add Aaron to the list!

Staff member
Charlie looks like a crew for lunch again.

Staff member
Yeah it’s looking like that for sure.

Haven't decided if I will put my car in this year or not.Depends if we get an early spring.

So what’s the Plan? We all meet for lunch on Saturday then hit the Coliseum after lunch ?

Looking at the early pictures, love that Chevy II / Nova, and the Black wagon!

The Yellow Mustang doesn’t look too Shabby either